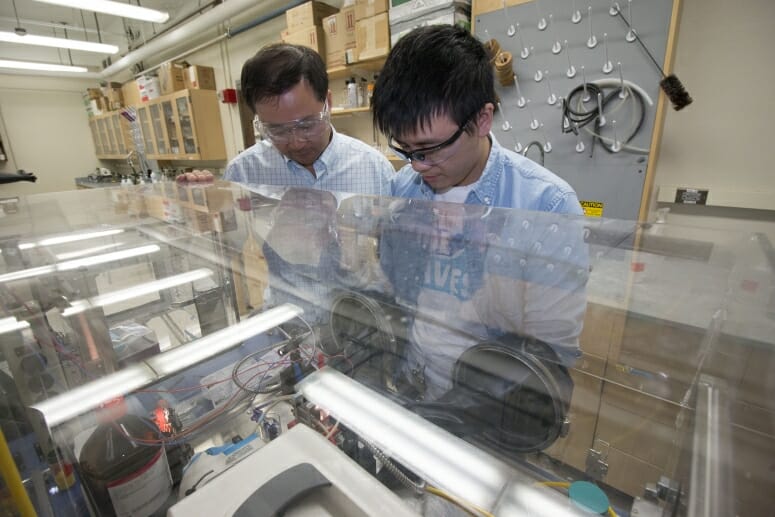 The growing use of solar power has hit a wall in some locations: At night, or on a cloudy day, electric utilities with heavy dependence on solar must switch to an alternative source like natural gas.

The “intermittency” problem is already starting to limit adoption of solar energy in Europe.

In the journal Chem, a University of Wisconsin–Madison professor of chemistry reports on a unified solar cell-liquid battery device that returns more than 14 percent of the incoming solar energy as electricity.

Song Jin’s technology converts sunlight directly to chemical energy and then releases electricity when needed. “We are talking about a round trip, a whole cycle,” he says. “Our first proof-of-concept device two years ago achieved 1.7 percent efficiency. Now we’ve improved our design and reached 14 percent, which is the highest reported number for an integrated solar-electric and battery system.”

Jin is an expert in solar energy conversion and the reduction-oxidation reactions used in the “solar flow battery” at the heart of his new device.

Solar cells are typically rated by the efficiency of conversion from solar energy into electric energy, and the best commercially available large-area solar panels reach about 24 percent efficiency. However, the 14 percent efficiency in Jin’s system measures much more, covering the full process from incoming sunlight to electricity delivered from storage at any time, day or night.

“As the intermittency problem grows, we believe it’s important to get a metric for the complete process, from sunlight to electricity available from storage,” Jin says. “We call it solar-to-output-electricity efficiency.”

The redox-flow battery used in Jin’s system operates on the same principle as existing batteries that store energy in large liquid tanks instead of the solids used in most common batteries. Some of these “redox flow batteries” are already used to store energy for the electricity grid.

One key to efficiency arises from a streamlined conversion of energy, Jin says. “We only used two conversions – from sunlight to stored chemical energy to electricity. Combining the functions of separated devices into a single device allows us to bypass the intermediate step of electricity generation, which results in a more efficient, compact, and cost-effective approach to utilizing solar energy.”

Depending on the situation, the same device could also route electricity directly to the end use, bypassing storage, Jin says.

Jin and Ph.D. student Wenjie Li combined an efficient redox flow battery with a high-performance solar cell provided by professor Jr-Hau He and his student Hui-Chun Fu from King Abdullah University of Science and Technology in Saudi Arabia.

Jin compares the need to match voltage to an elevator. “Say you want to go from the first to the sixth floor, but the elevator can only take you to the eighth floor. No matter how you get down two floors, the elevator is wasting energy.”

The situation is similar in the reported device, which generated 2.4 volts, but the battery only required 1.3 volts.  As in the case of the elevator, some of the energy is wasted.

Although the highly efficient solar cell used in the current experiment is costly, “The point we are trying to make is to show what is possible,” Li says. “If, on the other hand, you used a high-efficiency solar cell and could not get high efficiency with this technology, it would not be worth following up. But we found the opposite – unprecedented efficiency, with more room at the top from fine-tuning. We already know where to look to get further improvements.”

The technology Jin is advancing – unifying solar electricity generation with storage – could first be used in off-grid, standalone energy systems, Jin says, where there are no utility lines able to transmit and use extra photovoltaic electricity.

In the larger picture, the solar-power intermittency problem is already limiting plans in a growing number of locations, Jin says. “We have to work on multiple solutions for the storage of energy at a large scale. Denmark can’t use much more renewable energy because the grid is becoming unstable when the sun does not shine or the wind does not blow.”

There is no single path to optimum storage for solar electricity, Jin says. “There’s an urgent societal need to investigate every sensible alternative. Twenty years ago, solar cell development was the key to solar energy. Today, it’s storage.”