The electrical and plumbing shutdown scheduled for Tuesday, March 19 went very smoothly. The work was completed successfully and the building re-opened three hours sooner than expected. If there are any problems remaining in any labs, please bring the problems to Jeff Nielsen’s attention. The facilities committee is working hard to provide maximum prior notice of future shutdowns, but construction schedules change from day to day because weather and other factors outside our control affect how rapidly work can be done and even whether work can be done on a given date. For example, to protect workers, on days when the temperature is below 0 oF, no work is done. These factors affect both lead time and accuracy of projected dates of outages. 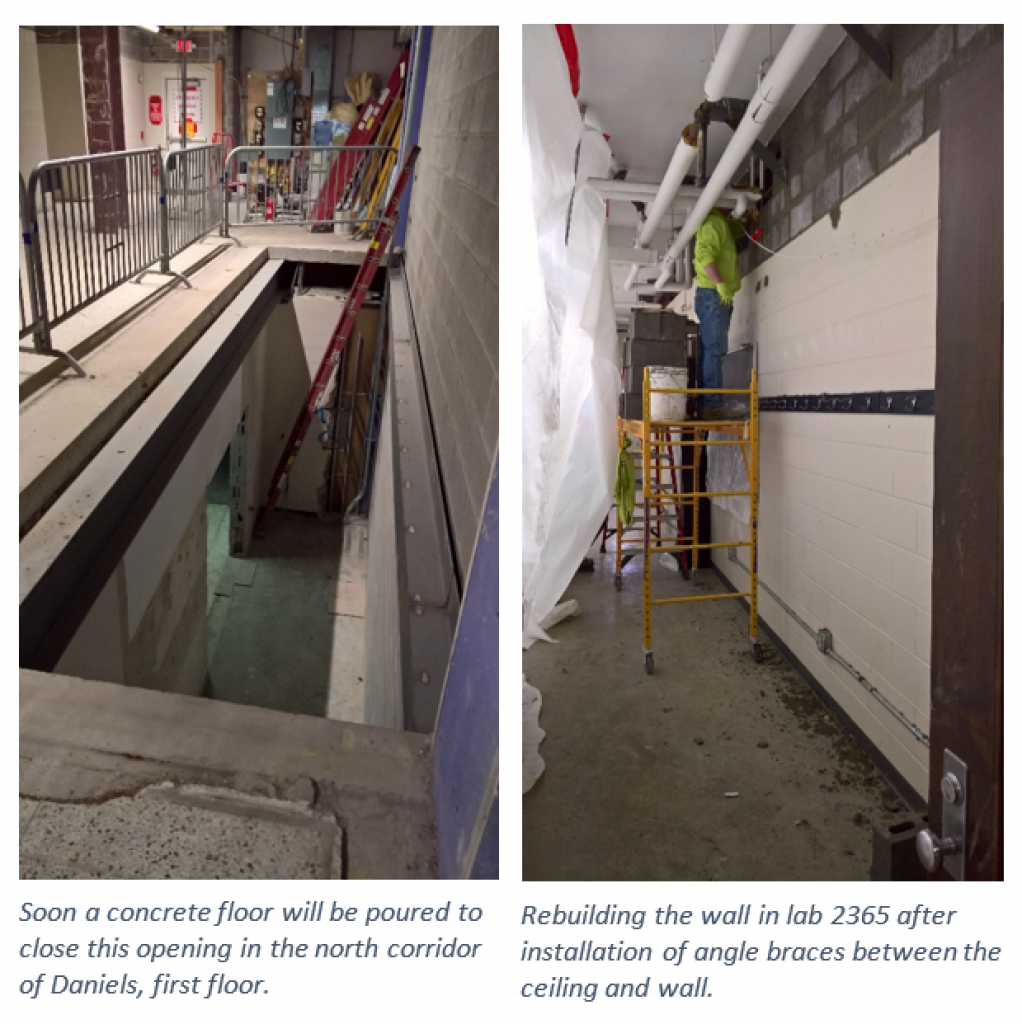 Work continues inside the north end of Daniels. The concrete-block wall on the first floor (near where the vending machines used to be) has been completely demolished and steel beams installed across the opening in the floor. This week we expect concrete to be poured to widen the floor of the exit corridor from the Daniels north stairway toward the loading dock. On the second floor, steel angle braces (“kickers”) have been installed in lab 2365 and in the storage room to the north of lab 2331. These stabilize what has become the edge of the roof of the remaining parts of Daniels. (Formerly the roof continued over the library and part of lab 2341. There is now an edge because of the demolition of the north end of Daniels.) On Thursday workers were replacing concrete blocks that had to be removed to install the kickers in lab 2365, in preparation for classes to occupy the lab after spring break. Work will continue in the basement and first floor this week.

In the sub-basement of Daniels all asbestos-containing material and wrapped concrete slabs have been removed. The floor is being excavated for installation of two sumps, each a cylinder about five feet high by four feet in diameter. To dig below the sub-basement floor to install the sumps a small excavator was moved into the sub-basement through the north area well door.

The tower excavation along University Avenue is full of machinery both for excavation and for stabilizing the vertical soil walls. A large backhoe fills trucks that enter and leave the site at the corner of Mills St. and University Ave. Soil nailers drill into the sides of the excavation so that steel bars can be inserted. Then rubber covers are added, a mesh of reinforcing steel rods is laid over the wall and affixed to the soil nails, and concrete is sprayed to cover the rebar mesh. The excavation is nearly complete on the side toward “The Crossing” (church), with only one more level (about six feet) of excavation and stabilization to go. Soon concrete footings for the stairwells and the building itself will be poured and a concrete slab 30’ by 30’ by 5’ deep (675,000 pounds of concrete) will be poured below the sub-basement level as a base for the tower crane that will move construction materials around the site as the new tower goes up. That huge chunk of concrete will remain below the new demo lab in perpetuity. Tower-crane installation, which will temporarily reduce the number of lanes of traffic on University Avenue, is planned for Easter weekend, April 19 – 21.

Between the loading dock and Charter Street work on the tunnel that will eventually bring steam and other utilities to the new tower is nearly complete. Insulation has been applied to the outside of the concrete tunnel and soil has been backfilled. Tamping of the backfilled soil was underway Thursday morning. This tunnel work is part of the Chemistry Building Project, but the work in Charter Street itself is part of a different project. The latter project is currently stalled because frost in the ground prevents effective backfilling, tamping and repaving Charter Street. We do not have a good estimate of when traffic in Charter Street will be restored. During the week of April 1 the loading-dock driveway will be temporarily closed so that it can be repaved. This should reduce the amount of mud and alleviate water run-off into the building along the driveway.

This information is up-to-date as of Thursday afternoon. Email bulletins will be provided as needed.