Tower Crane. Success! The tower, turntable, and cab of our tower crane were erected over the weekend. Friday night equipment was brought in and lanes were closed on University Avenue. Early Saturday morning the construction team set up a large mobile crane. Flatbed trucks brought sections of the tower crane to Mills Street where they were unloaded and lifted into place by the mobile crane. By noon Saturday most of the work on the tower was done and on Sunday the equipment was moved out and University Avenue was restored. The horizontal jib and counterweights of the tower crane will be erected the weekend of May 18 – 19, weather permitting. 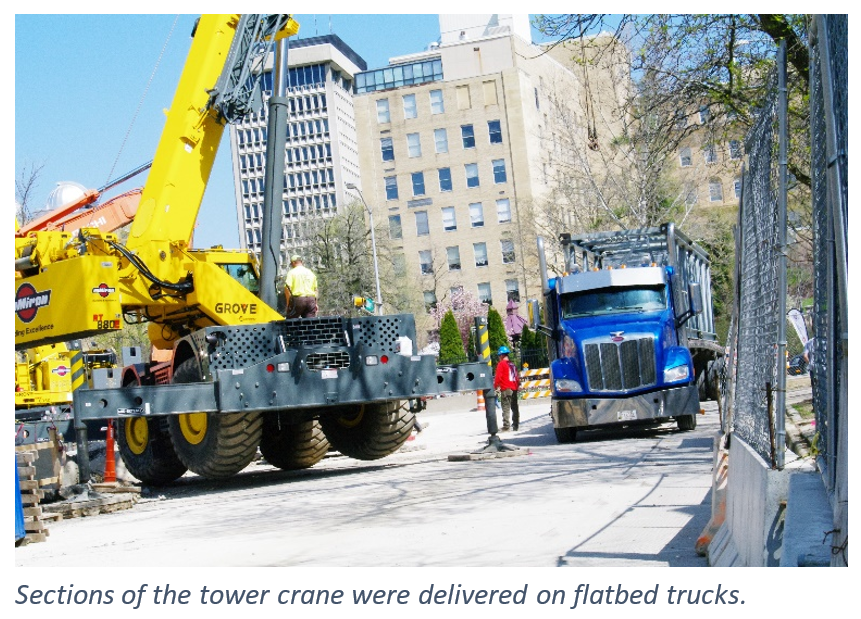 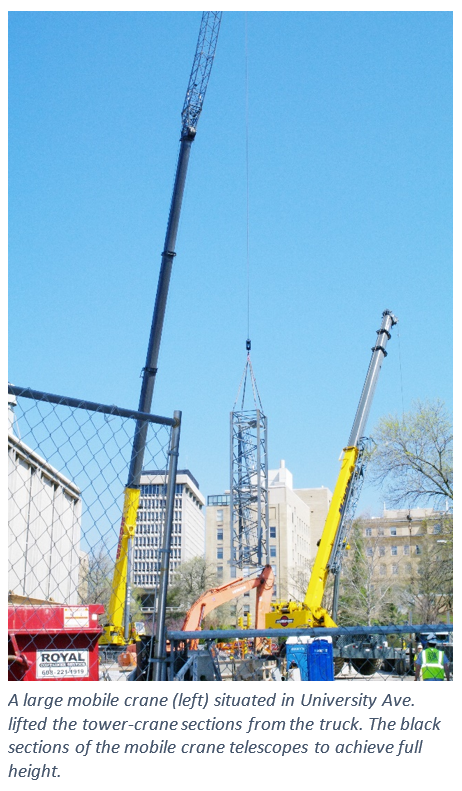 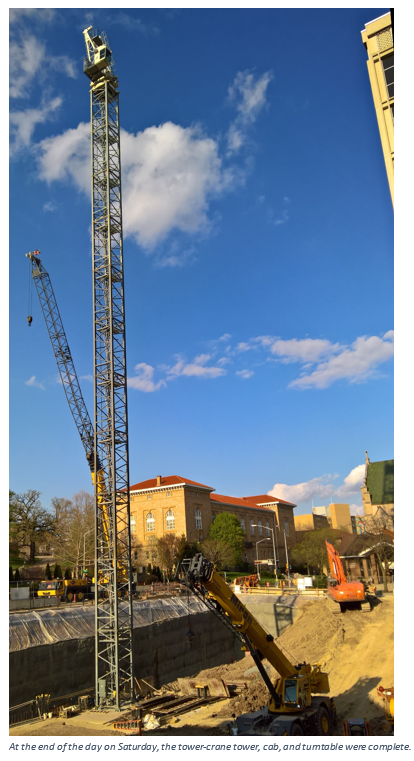 Charter Street is now open to southbound traffic only, but open at last! If you are going from our building to the west and south—such as Union South, engineering, or the Discovery Building—remember that pedestrians can’t safely cross Charter Street against the light anymore. There will be lots of southbound traffic, especially late in the afternoon, so be careful and wait for the walk light. Because Charter Street is open, the crosswalk on the west side of the University Avenue / Charter Street intersection is also open. Students coming up the sidewalk in front of Psychology can now go straight across University Avenue to the Medical Sciences Center and other buildings to the northwest of us. Workers are rebuilding the retaining wall around the tree at the southwest corner of parking lot 55 and pouring concrete for sidewalks along Charter Street. With good weather, Charter Street will soon be back to normal. 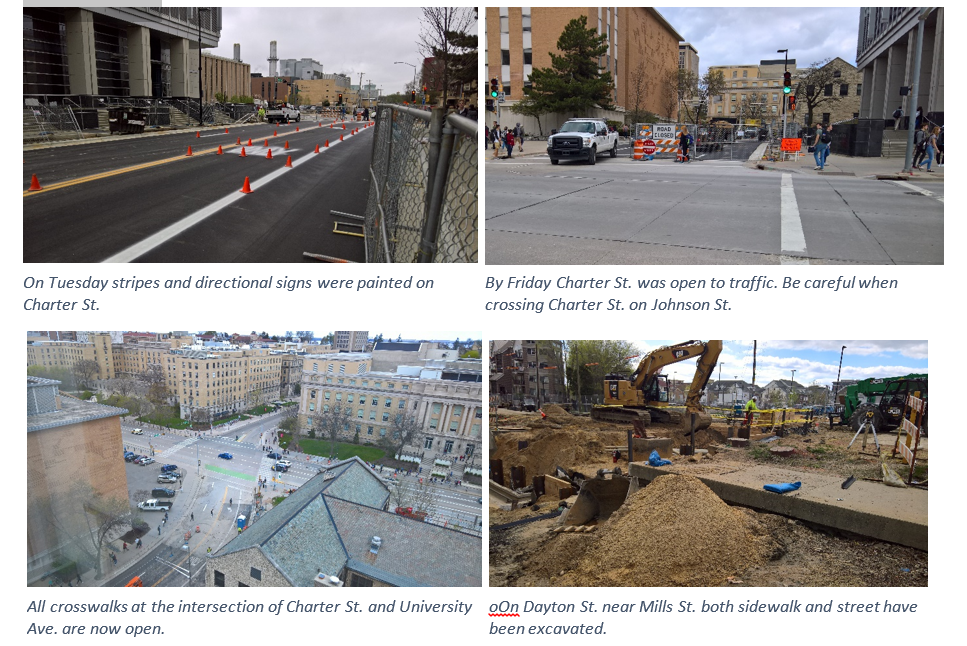 Mills Street and Dayton Street. Things are not as rosy on Mills Street. Erection of the tower crane requires a second, large crane on the site with trucks parking in Mills Street to deliver sections of the crane. Thus, the part of Mills Street between University Avenue and Conklin Court (halfway from University Avenue to Johnson Street) will be closed for the next two weeks. Traffic from University Avenue headed south on Mills Street will need to go past Mills, turn left on Charter, turn left on Johnson, and turn right on Mills. Drivers will get a great view of our construction site but will go around the block to get where they want to be. Dayton Street remains closed and lots of work is underway. Many areas have been excavated and some of the underground utilities are visible.

Loading Dock. On Friday, there was a big concrete pour in the southwest corner of the excavation, with a pump truck in the loading-dock area and many concrete trucks coming in and going out. The same is planned for Monday from 11 am through 3 pm and for Wednesday, Thursday, or Friday. Whether the subsequent pours occur, and which day, depends on the weather.

Tower excavation.  The concrete pours reflect the fact that our new building is going up and the pace is accelerating. Completion of the tower crane in a couple weeks will accelerate it further. Concrete was poured Friday at the base of the west stairway of the new tower and will be poured next week for footings along the University-Avenue side of the excavation. Concrete may also be poured for footings for the heavy trusses that will support the tower above the large lecture rooms in its sub-basement and for walls along the side of the excavation toward our loading dock. Last week workers pulled electric power cables to the base of the tower crane and filled gravel around the base, in preparation for constructing the crane itself.

This information is up-to-date as of Monday morning. Email bulletins will be provided as needed. Kudos to Jim Maynard for the great photos of the tower-crane erection.
John Moore and Bob McMahon