In recent years, scientists have teased out many of the secrets of biomineralization, the process by which sea urchins grow spines, mollusks build their shells and corals make their skeletons, not to mention how mammals and other animals make bones and teeth.

The materials that animals make from scratch to build protective shells, razor sharp teeth, load-bearing bones and needlelike spines are some of the hardest and most durable substances known. The recipe for making those materials was one of nature’s closely held secrets, but powerful new analytical tools and microscopes have peeled back much of the mystery, showing, at the nanoscale, exactly how a wide array of animals use precisely the same mechanisms and starter chemicals to make the biomineral structures they depend on. 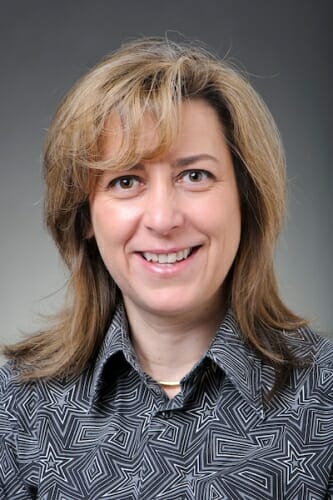 Now, in a report published today (Aug. 19, 2019) in the Proceedings of the National Academy of Sciences (PNAS), a team led by Pupa Gilbert, a University of Wisconsin–Madison professor of physics, shows that the recipe for making shells, spines, and coral skeletons is not only the same across many modern animal lineages, but is ancient – dating back 550 million years – and evolved independently more than once.

The findings are important because they help stitch together an evolutionary narrative of biomineralization. The fuller picture of a process ubiquitous to animal life on our planet not only tells us something important about our world, but the details may one day be harnessed by humans to produce harder, lighter, more durable materials; tools that never need sharpening; more faithful biomedical implants; and the possibility of human intervention in things like rebuilding the world’s coral reefs.

“The finding that biomineralization evolved independently multiple times, using the same mechanism, tells us that there is a strong physical or chemical reason for doing so,” says Gilbert, a world expert on the process of biomineralization. “If one organism starts making its biomineral that way, it outcompetes all others that either don’t make biomineral or make them differently, it doesn’t get eaten, and gets to transmit that good idea down the lineage.” 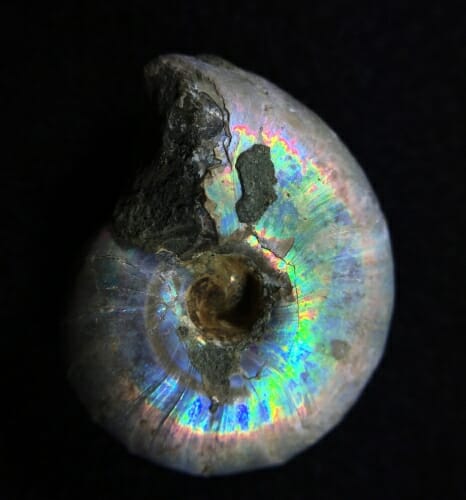 A Desmoceras fossil. A cephalopod that thrived in the early Cretaceous, 146 to 100 million years ago. Note the fossilized biomineral nacre or mother of pearl. PHOTO BY PUPA GILBERT

The new PNAS report builds on a series of seminal discoveries by Gilbert and her colleagues. In past studies, the Wisconsin physicist has shown that the process of biomineralizations works the same in vastly different classes of animals, ranging from mollusks like abalone, to echinoderms such as sea urchins, and to cnidaria, a large group of animals that includes corals, jellyfish, and sea anemones. These phyla, or broad groups of animals, have no common ancestor that was already biomineralizing, thus they must have evolved biomineralization mechanisms independently. Therefore, Gilbert says, “it is extremely surprising that when they started biomineralizing in the Cambrian (more than 500 million years ago) these three phyla started doing it in precisely the same way: using attachment of amorphous nanoparticles”.

“Biomineralization illustrates both the unity and diversity of nature,” explains Andrew Knoll, a professor of natural history and of Earth and planetary sciences at Harvard University, and a corresponding co-author of the new report. “Biomineralized skeletons may have evolved as many as twenty times within animals alone. That means that no two of these biomineralizing groups share a common ancestor that, itself, fashioned a biomineralized skeleton.” 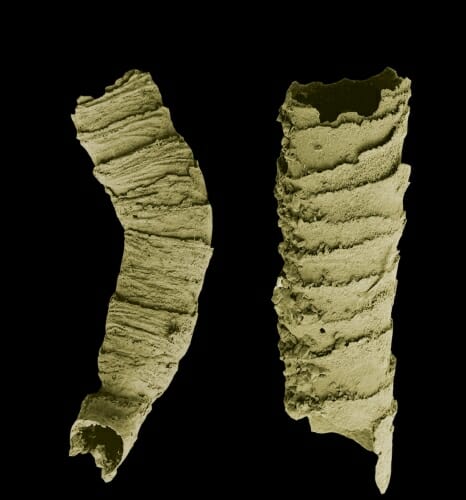 A Cloudina skeleton, with its characteristic series of stacked funnels is the oldest known fossil biomineral at 550 million years old. PHOTO BY PUPA GILBERT

Gilbert and her colleagues have shown that different biominerals form beginning with amorphous calcium carbonate nanoparticles, which are produced in cells and are the critical starter chemical for all of the materials that form in the biomineralization process, be it the nacre, or mother-of-pearl, that lines an abalone shell or the rock-grinding teeth of a sea urchin. “More than one biomineral forms by these amorphous precursor nanoparticles,” says Gilbert. “It doesn’t matter if it is a sea urchin spicule, a tooth, a spine, nacre, or coral. All of these systems have the same amorphous precursors.

“Amorphous calcium carbonate nanoparticles,” adds Gilbert, “are stabilized in confinement, and reversibly so. Thus, crystals don’t nucleate and grow at the wrong place and time, but they can and do at the right place and time, that is, on the growing surface of a shell, a coral skeleton, a sea urchin spine.”

The ability of many animals to make hard, protective or defensive structures, says Knoll, was likely a broad response to the evolution of carnivores, reflected in a “burst of biomineralization” seen in fossils from the Cambrian period, beginning some 541 million years ago.

The microscopic particles of calcium carbonate produced in animal cells are the same stuff that forms “lime” deposits in pipes and plumbing fixtures. In an animal, it is transformed at the site of biomineralization by attaching to the site and forming crystals in which individual atoms are neatly aligned to make a lattice, a scaffold of sorts for whatever structure an animal is building. The process has been teased out by Gilbert’s team using a novel microscope that employs the soft X-rays produced by synchrotron radiation to observe at the nanoscale how the structures come together as they are formed.

Gilbert’s team went back in time applying the same techniques to probe the deep fossil record in three distinct phyla, or broad groups of related animals, going as far back as 550 million years to sample the oldest known animal biomineral: the Cloudina skeleton with its characteristic series of funnels nestled into one another.

Gilbert notes that while animal remains undergo significant changes in the process of fossilization, the nanoparticle biomineralization signature remains intact and is observed by cracking open fossils and using a scanning electron microscope to probe the site of the fracture for the telltale signs of nanoparticles during the original crystallization process. “We stepped back in time as far as possible, to the very first fossils, and biomineralization by particle attachment looks the same as in modern animals.”

The biomineralization story unraveled by Gilbert and her colleagues may inform the development of novel materials useful for industry.

“We don’t know how to make amorphous calcium carbonate or any other material form a space-filling solid and then crystallize, but cells in marine organisms do,” Gilbert explains. “What we learn from them, we can reproduce in the lab and in industry, and make materials that are far better than the sum of their parts, as all biominerals are.”

This research was supported by the U.S. Department of Energy, Office of Science, Office of Basic Energy Sciences, Chemical Sciences, Geosciences, and Biosciences Division, under Award DE-FG02-07ER15899; and National Science Foundation grant DMR-1603192.