Also, concrete was poured for the lowest levels of several of the columns that will extend the full height of the new tower; they are less than a foot north of the remaining part of the Daniels wing. Proximity to the existing wall required contortions on the part of workers directing concrete from a bucket into the columns (see photo). Eventually the spaces between the columns will be filled in and constitute a wall that, together with the existing north wall of Daniels, will provide a fireproof separation between the new tower and Daniels. More columns will be poured this week. 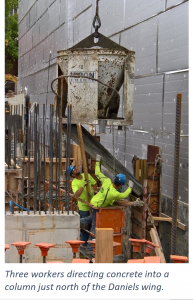 Mills Street Side of Daniels. The two area wells on the Mills Street side of the Daniels wing—right outside the teaching labs—are nearing completion. During the past two weeks stone has been delivered and backfilled around the north area well, bringing the area outside the well up to approximately the level it was before construction began. This provides a level space for the next phase of the Daniels sub-basement work: delivery of large electrical equipment through the north area well. A crane will lift transformers and a new emergency generator into the area well from trucks staged along Mills Street. Once lowered to the sub-basement level, each item of electrical equipment will be moved inside the building via a large doorway and then installed in its designated location.

Loading Dock. The loading dock will be closed for four days September 12 – 15 (Thursday, Friday, Saturday, Sunday) so that the driveway to the loading dock can be paved with asphalt. Should bad weather prevent work during that time, the paving will occur the following week on weekdays (due to a home football game Saturday). There may be other brief closures at unpredictable times.