New Tower. A lot has been accomplished in the excavation during the past two weeks. (There was no newsletter September 16, so this report covers two weeks.) Concrete was poured Thursday afternoon and evening in an area that will be just outside the west entrance to the first floor of the new tower. This is between our new building and “The Crossing” (the church on the corner of Charter Street and University Avenue). Underneath this concrete are three spaces housing mechanical equipment the includes large air-handling units to serve the lecture rooms. These air handlers eventually will be lowered to the basement level by a crane, moved west toward “The Crossing”, and lowered to the sub-basement level west of where the 360-seat lecture room will be located. 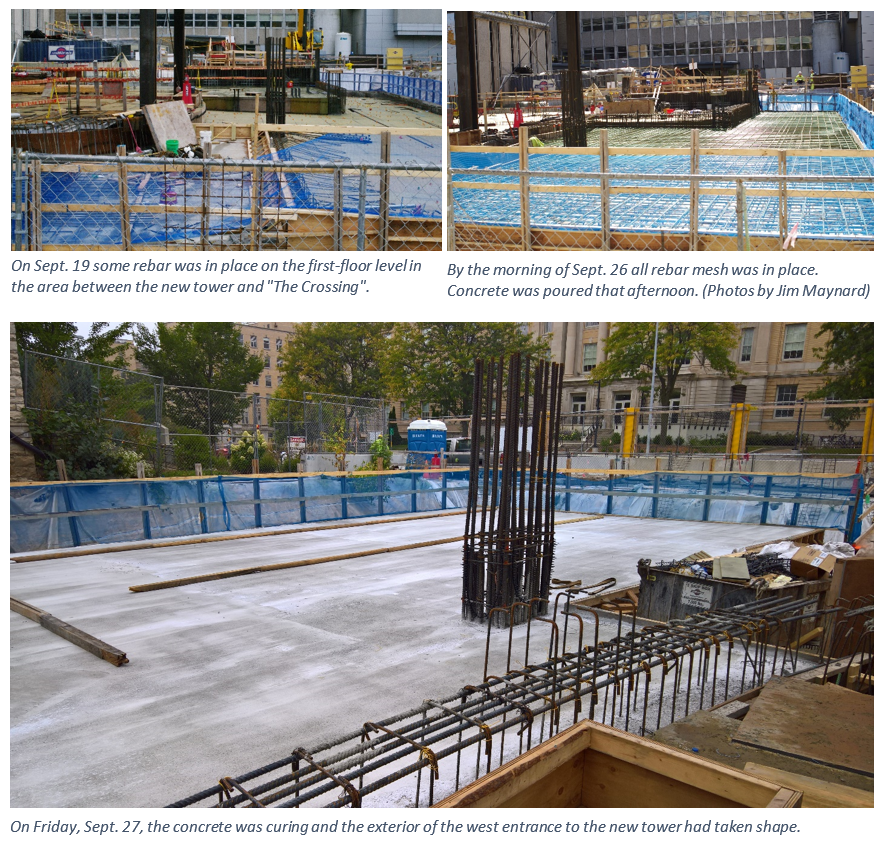 Smaller quantities of concrete have been poured in several other areas. The walls of the elevator shafts have risen to the basement level. Waterproofing and insulation have been installed and some gravel has been backfilled around them. The latter is needed because the elevator shafts extend below the sub-basement level to allow space for mechanical equipment needed to operate the elevators.  Concrete is also being poured around the vertical steel columns that support the large trusses in the west side of the excavation. The concrete protects the steel from heat should there be a fire. The area around these columns is still a maze of supports and shoring for concrete already poured and soon to be poured on the first-floor level. 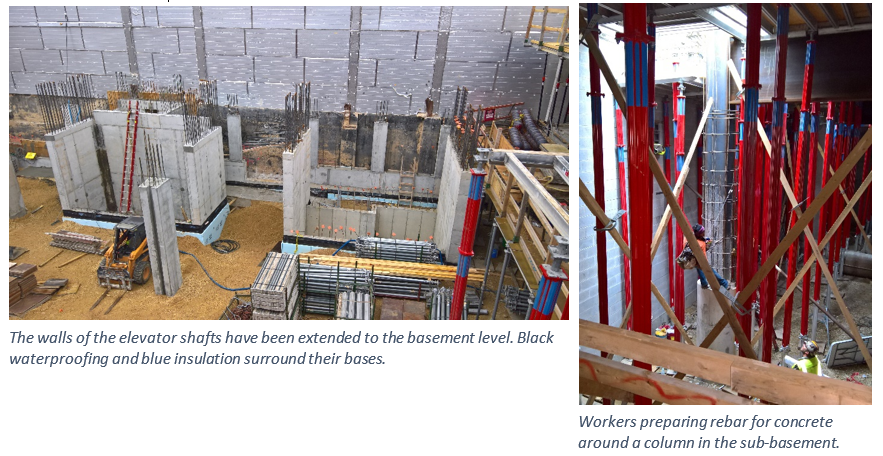 Daniels Sub-basement. A new emergency electric generator, which will serve Mathews, Daniels, and the new tower, and associated electrical equipment have been moved into the new rooms in the Daniels sub-basement and swathed in plastic sheeting for protection until the rooms are finished. The emergency generator will soon be connected to electric cables as well as to exhaust ducts that will run up the near side of the new tower, exiting at the roof. The bank of electrical ductwork that will carry power into the new tower has been installed. The generator and other electrical equipment were delivered to the east side of Daniels, lowered into the north area well and transported into the sub-basement.

Mock-up.  Progress continues at the mock-up in parking lot 45. Concrete-block walls have been built at two levels. On the first-floor level the wall extends only halfway down from the second floor, which also will be true on the first floor of the new tower. Behind the overhang below the block wall will be another wall. The prototype of the mechanical penthouse now has shoring ready for a roof to be built. The walls and roof will subsequently be finished and tested to make certain they are waterproof.

Loading Dock. There are no planned closures of the loading-dock this week. However, there may be brief closures at unpredictable times. The next large concrete pour, which will close the loading dock, is currently scheduled for Tuesday, October 8. 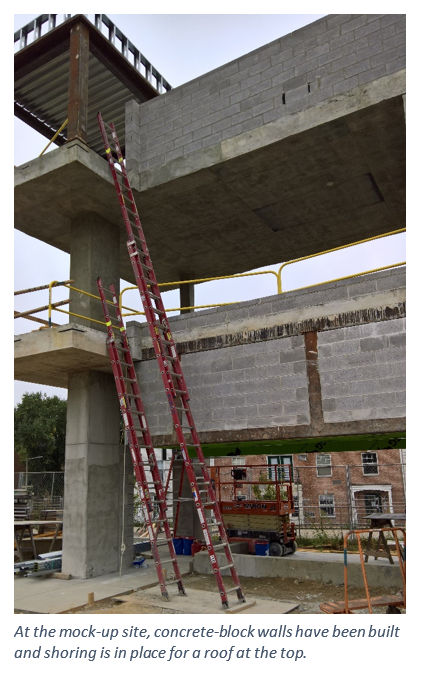