New Tower. The new tower area looks completely different from what you saw in the last newsletter. Shoring and concrete forms now cover much of the basement and first-floor areas in preparation for pouring concrete floors on both levels. The first-floor pour is currently scheduled for this Thursday (and will close the loading dock from 4 am to 1 pm that day). This will be one of the largest quantities of concrete poured during construction, covering much of the first floor including the learning studio, corridors, café, rest rooms, and utility areas on the west side. On Friday, rebar mesh with plastic-sphere voids was being delivered from Springfield (where it is assembled) and workers were busy preparing to install the mesh in the areas where concrete will be poured.

At the basement level, the elevator-shaft walls mentioned last week now barely protrude above the concrete forms and the main columns supporting the big trusses have mostly been enclosed in concrete. The column shown in the photo will be visible in the back of the 360-seat lecture room. Its surface will be specially cleaned to remove seams and make the column look uniform in color and texture. There are wood forms at the top of the column because the tops of some columns will be poured at the same time as the floor through which they protrude. 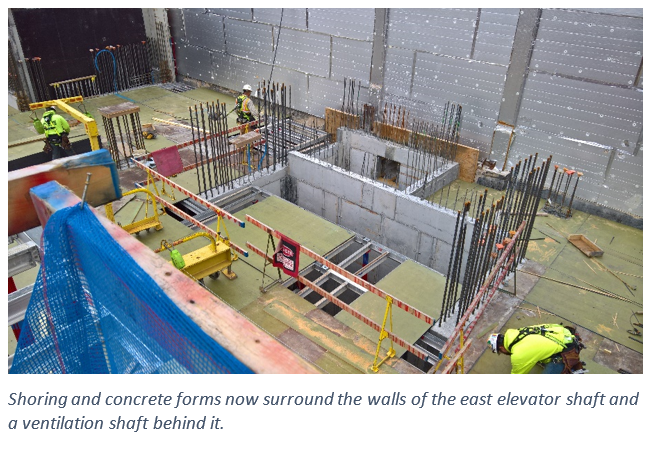 Medical Sciences Center. Last week construction began on the new facility for the Chemistry Learning Center. Located on the fourth floor of the Medical Sciences Center, one floor below the temporary location of the analytical chemistry laboratories, this new facility will provide much-needed learning spaces and staff offices for the CLC. Also, this week demolition begins in a small area adjacent to the analytical space that will become a study room and interaction space for analytical students to work on writing up their lab projects. Electricians, plumbers, sheet-metal workers, and carpenters will be working all week to remove casework, sinks, and a fume hood from this area. By Friday painters should be preparing the walls for paint.

Daniels First Floor. Work has resumed in the north end of the first floor of Daniels, with installation of heating ductwork and electrical conduit. This is the area where a pipe froze and burst last February, flooding the lower floors of the building. Thermal insulation on the exterior wall in this area is being re-sealed as well. The goal is to eliminate any possibility of another flood.

Daniels Sub-basement. Three inches of rain in a few hours caused some incursion of water into the sub-basement last week. Pumps in a sump at the southwest corner of the sub-basement of the new tower could not keep the water level down, allowing water to move to the existing building. Also, water collected behind our loading-dock and seeped into Mathews. New, more powerful pumps have been ordered for the sump in the new tower and should have been installed by the time you read this. Also, a pump will be installed behind the loading dock. Both will pump water through plastic piping directly into the storm sewer. Presumably these measures will prevent further flooding in our existing buildings. 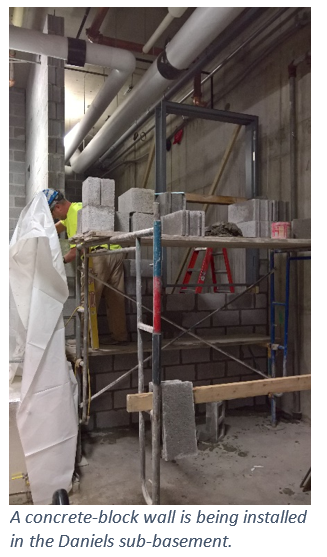 Last week workers installed concrete-block walls to enable construction of a stairway that will allow access between the Daniels sub-basement and the new tower. (The two sub-basements are on different elevations, so stairs are needed to connect them.) Eventually, a door will be installed through the wall that currently separates the tower from Daniels.

Loading Dock. We expect the loading dock to be closed from 4 am to 1 pm on Thursday for the first-floor concrete pour; if there is rain or some other delay, the shut-down might be postponed until Friday. Also, there may be brief closures at unpredictable times.