New Tower. While many of us have been celebrating holidays the construction team has been working hard to raise our tower higher and higher. What they had achieved by the end of the year is shown here:

On Thursday, December 19, a concrete pump truck occupied the loading-dock area to pour the west side of the fourth floor of the tower. Almost immediately rebar and concrete forms were built above the fourth floor. By January 3 there was some decking in place for the northwest side of the fifth floor, which eventually will house an organic teaching laboratory. The pace at which our new tower is rising is spectacular!

In preparation for pouring concrete on the east (Mills Street) side of the tower, the construction team has been building scaffolding. Scaffolding is constructed by building each section (about six feet high by ten feet square), then raising the section with a crane and building another section in place under it. When a vertical unit is tall enough, the crane lifts it from the fabrication area and lowers it into the tower, alongside other sections previously constructed. (In the first photo of this newsletter the red crane is lowering a section of scaffolding into the new building.) Right now, what will become the atrium and staircase in the tower is a maze of vertical supports, some of which extend from the sub-basement to the fourth-floor level. By the end of last week essentially all the decking for the east side of the fourth floor was in place, ready for “bubble deck” to be placed and concrete to be poured.

In the area of the Learning Studio, exterior walls are being constructed and some granite trim has been installed. In the tower sub-basement ductwork and piping are being installed in mechanical rooms on the west side. Drainpipes are being installed in the sub-basement floor, below what will be a corridor to the back of the 360-seat lecture room. And work will begin soon on the west stairwell going up from the sub-basement. Because subsequent concrete pours will have the pump truck located along University Avenue at the northwest corner of the site, extra shoring is being installed in the sub-basement in the back of the large lecture room to accommodate the weight of pump trucks that will park above. (The ceiling in this area is just below the sidewalk along University Avenue, right where one of the feet of the pump truck will be located.) 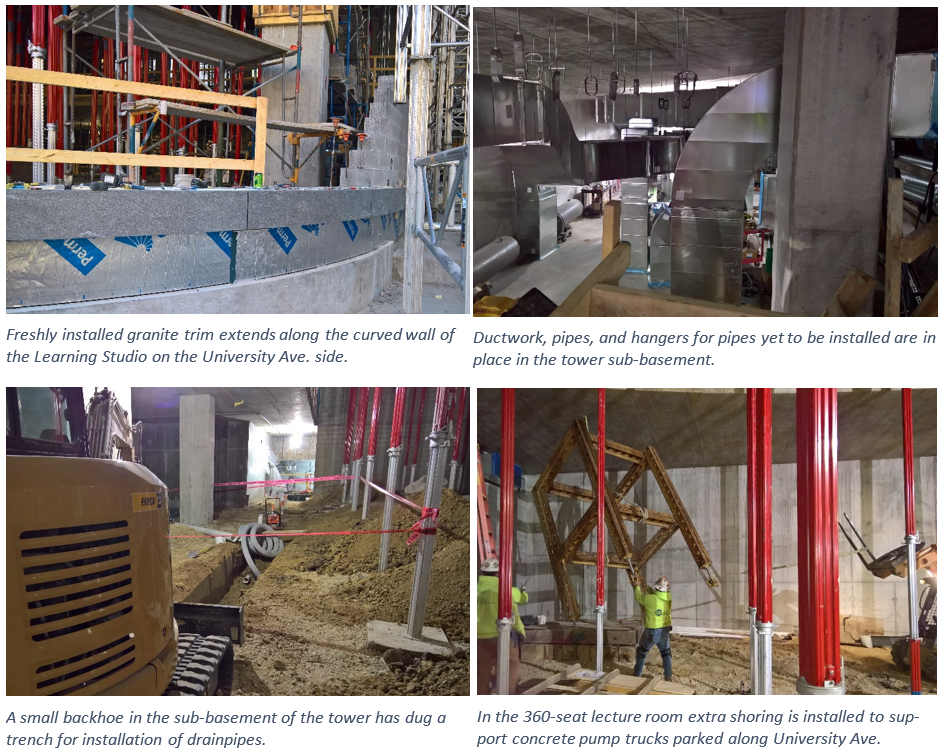 Sprinkler Installation. This week marks the start of the sprinkler project on the eighth floor of Daniels. By the time you read this labs and offices will have been vacated and construction crews will be putting holes in walls and installing pipes for the new sprinkler system. When the eighth floor is completed in a couple weeks the crews will move to the seventh floor. A meeting is scheduled Thursday at 1:30 pm in room 1315 to introduce those on the seventh floor of Daniels to important details that affect their labs and offices during sprinkler installation.

Loading Dock. There are no expected loading-dock closures this week. There may be brief closures at unpredictable times.