Crawler Crane Luffer Jib. Since last Thursday Mills Street has been completely closed from Johnson Street to University Avenue so that a luffer jib can be added to the large red crawler crane that has been working in Mills Street for the past month or so. On Friday afternoon a defective electrical component delayed erection of the crane, so Mills Street will remain closed on Monday. The crane is expected to be back in action Monday afternoon.

Adding the luffer jib to the already long boom on the red crane required the crane to move northward—nearly to University Avenue. Then the main boom together with the luffer stretched almost to Johnson Street. When erected, with the luffer extended vertically, the red crane will be taller than the tower crane. However, the luffer usually will be nearly horizontal, both to prevent interference with the tower crane and to make it easier to move concrete and other loads to various positions on the upper floors of the tower. 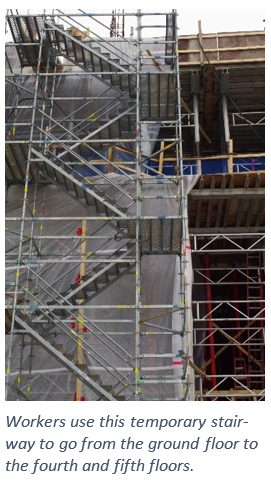 New Tower. Fifth-floor concrete is now complete. Because the red crawler crane was temporarily out of commission for installation of the luffer a lot of lifting on the east side of the building had to be done by the tower crane. That meant that the tower crane was unavailable to raise concrete to the west stairwell above the fifth floor. With very little notice the concrete was supplied by a pump truck that occupied the loading-dock area on Friday afternoon. In addition to the stairwell, many columns, some shoring, and a little decking for the west side of the sixth floor are now in place. Soon we will have a sixth floor and both organic instructional floors will be in place. The new tower is tall enough that ladders are insufficient to reach the upper floors. A temporary stairway has been constructed on the University-Avenue side.

Last Wednesday crushed stone was delivered into the sub-basement via a conveyor. By Friday Bobcats in the sub-basement were smoothing the stone to make a gently sloped floor for the 360-seat lecture room. Ductwork for heating and cooling the lecture rooms continues to be installed.

Lab Mock-up. Last week many chemistry colleagues, members of the design team (Alan Massey and Rob Voss from Ballinger in Philadelphia and Curtis Norton and Dan Hale from Strang in Madison), and representatives of FP&M and state agencies carefully examined the lab mock-up to make certain that, once constructed, our new labs will support learning in the best way possible. A report has now been compiled listing items that differ from specifications and items that need further development if the new instructional labs are to achieve maximum effectiveness. All agreed, nevertheless, that our new labs will be a huge step forward toward meeting our goals for student learning.

Fire Sprinkler Project. New pipes and fire sprinklers have been tested and ceilings are back in place on the eighth floor so that everyone can move back into their offices and labs. (Installation of new alarm devices later in the project will complete the work.) Piping and sprinkler installation on the east side of the seventh floor is scheduled to begin after a walk-through at 8:30 am on Monday, February 3. Work on the west side of the seventh floor will begin a week later, on February 10. The sixth floor does not follow immediately after the seventh because ongoing construction on the fourth floor of Daniels has been coordinated with the sprinkler project to minimize times when labs cannot be occupied. The plan is for work to begin on the west side of the fourth floor on Monday, February 17.