A hypothesis can be a scientist’s best-educated guess about how an experiment might turn out or why they got specific results. Some- times, they’re not far off from the truth. Other times, they’re wrong. Being wrong isn’t always a bad thing. Often, it means that the researchers get to discover something new and exciting. This exact scenario happened when the Burstyn and Buller labs decided to work together on a project.

“You get alternative perspectives, and that’s why collaborations can be so beneficial,” said Brian Weaver, a graduate student in the Burstyn group.

In addition to being part of a healthy diet, proteins are responsible for many complex chemical reactions in our body’s cells and even in bacterial cells. Sometimes these proteins have metals in them that help facilitate these reactions. While the Burstyn group aims to understand how these metals can help, the Buller group makes new proteins that can perform specific chemical reactions. By combining their knowledge, the Buller and Burstyn groups wanted to make bacterial cells that would incorporate cobalt metal into their proteins.

By putting cobalt metal into proteins, bacterial cells can make specific products that would otherwise pro- duce lots of wasteful and potentially hazardous chemicals in a lab. Performing the reactions in cells makes the chemical reactions better for the planet and more efficient.

As Prof. Andrew Buller said, “This is how life does chemistry, and the transformations it pulls off are wild!”

Too much cobalt can kill cells, which makes trying to incorporate the metal into proteins a challenging task. The two groups thought that they could evolve cells to withstand high concentrations of cobalt metal.

Weaver and graduate student Lydia Perkins from the Buller group were paired up and asked to perform these experiments. Interestingly, after evolving these new cells, the pair realized that their initial thoughts were incorrect about how cells can incorporate cobalt into their proteins. Instead of seeing more proteins with cobalt metal in them, the researchers found out that the cells made to survive in high concentrations of cobalt did the opposite.

“When we evolved them, it turned out that they were worse at incorporating cobalt. [The cells were] good at surviving in cobalt, but bad at putting it into [their proteins],” Perkins explained.

When Perkins and Weaver went back to the drawing board, they decided to run some controls. Controls can tell researchers how something they are changing in an experiment compares to their system without that specific change. 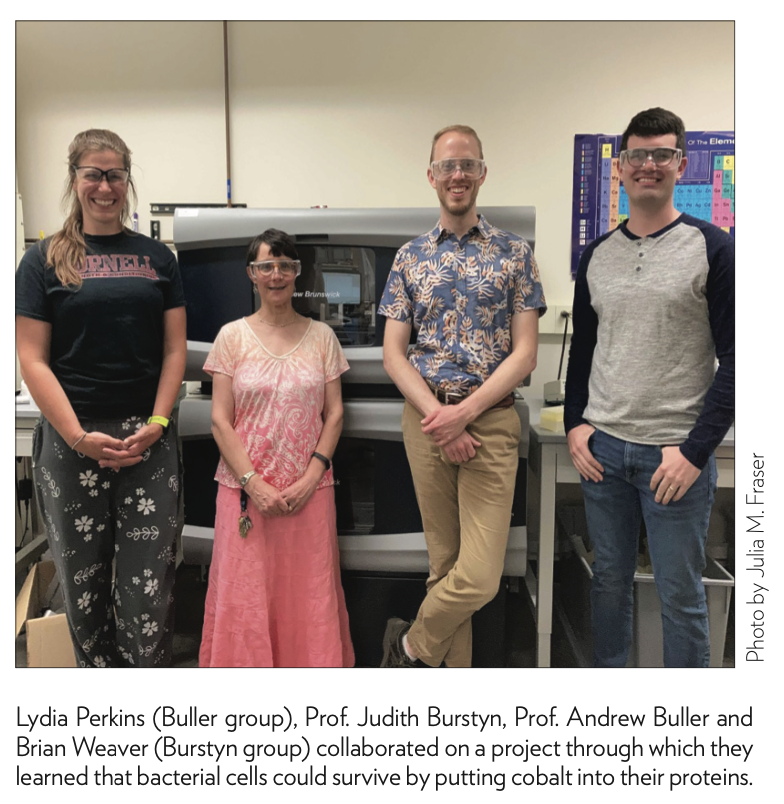 Thanks to the control experiments, the two groups soon realized that there was no need to evolve the cells in the first place. As it turns out, at high concentrations of cobalt metal, bacterial cells could survive by putting cobalt into their proteins- which is precisely what the researchers wanted in the first place.

“We had a misconception on how this needed to work. That’s really what Brian and Lydia figured out,” Prof. Judith N. Burstyn commented.