Prof. John W. Moore, the W. T. Lippincott Professor of Chemistry at UW– Madison, retired from the Department at the end of Spring 2021. His wife, Program Manager Betty Moore, who retired at the same time, made major contributions to the Department and to John’s professional career.

John’s career is marked by a plethora of academic and teaching achievements, including state, national and international awards, editing the leading publication in his field, publishing 114 papers, organizing 116 workshops and symposia, co-authoring several college textbooks and publishing an online OER interactive learning system.

As a chemistry educator, John’s accomplishments span three main sectors. The first, which began in 1965, involved finding new and effective ways to use emerging technology in teaching. The second was his outreach efforts, such as creating accessible materials for other chemistry educators to use. The third involved national and international leadership, such as his 13-year editorship of the Journal of Chemical Education.

“Most of the things I have done over the years as a chemistry educator were designed to improve student learning,” John said. “To do that, you need to have a good idea of what students are thinking and doing.”

John brought 24 years of successfully supporting student learning when he joined the Department of Chemistry in 1989 as the chair of the General Chemistry Division and the director of the Institute for Chemical Education (ICE). In the former role, John led the Department’s NSF-sponsored New Traditions curriculum project, which brought more active-learning methods to the undergraduate curriculum. In his ICE directorship, John expanded the Institute’s activities to include kits and publications that continue to be distributed throughout the world, increased the number of themes that guided its summer Chemistry Camps and developed new summer workshops for college, high school, middle school and early elementary school teachers. 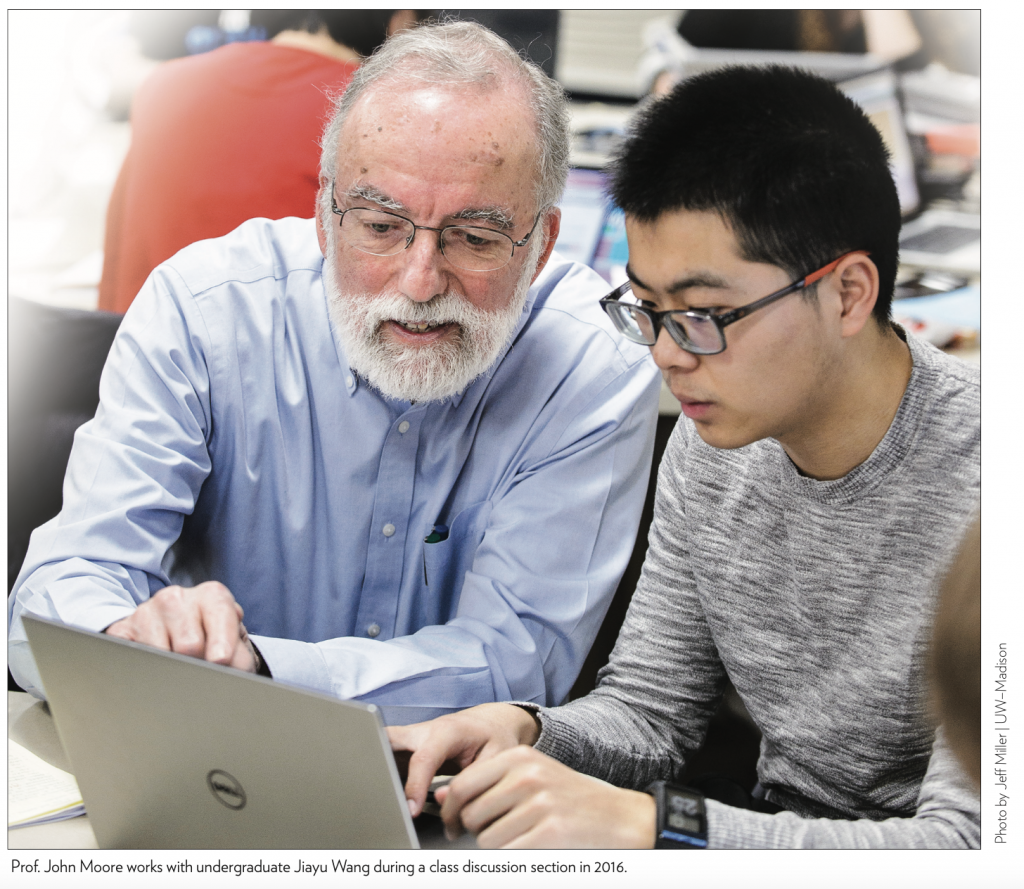 In the late 1990s, John led the development of a new program for teachers of kindergarten through second grade that incorporated science into their classrooms seamlessly. To do this, he reached out to elementary school teachers and learned about what students were doing in their classrooms. Then, the teachers and Institute staff developed hands-on and safe learning materials that intermingled science, reading, writing and art to enhance the schools’ curriculums. The students’ regular teachers were thus able to become their science teachers as well.

Throughout his numerous positions, obstacles have presented themselves, but he has introduced new solutions to overcome them.

For instance, when the pandemic in- interfered with the summer 2020 session of the ICE Chemistry Camps, John, Betty and Institute for Chemical Education staffer Isabelle Tigges-Green decided to create new formats for the activities so children could do projects in their kitchens with minimal supervision from their parents.

“We wanted to make the camp available to as many people as possible, and interest as many children and parents in science as we could,” John said.

John’s involvement with students to improve learning also applied to undergraduates, graduate students, postdoctoral fellows and visiting faculty. One example is his long-term participation in restructuring the Chemistry 109 course. In 2000, John collaborated with Prof. Judith N. Burstyn and two postdoctoral fellows to completely revise the Department’s flagship course for first-year students. Carrying on a process initiated by the New Traditions curriculum project, John met weekly with a group of students—one from each of 16 discussion-laboratory sections of this 360-student course. By learning about how students experienced Chemistry 109, John continually adapted the course to better meet students’ needs. This culminated in 2014 when several students volunteered to work on undergraduate research with John. This working group restructured the course to introduce more group-based learning, convert one lecture session to an active learning session and offer online materials to enhance student discussions. Evaluation of learning outcomes showed that the upgraded version of Chemistry 109 was more effective at teaching students. The undergraduate researchers not only contributed to the project, but also learned from John about Chemistry Education.

John’s leadership in Chemistry Education is exemplified by his editorship of the Journal of Chemical Education. As an associate editor, Betty helped John make the Journal more accessible to teachers of all kinds—especially high school teachers. Early in his 13 years as editor, the Journal celebrated its 75th anniversary with the Perspectives series of articles in which experts in many sub-fields of chemistry, some of them Nobel Prize winners, provided summaries of research and prospectuses for future developments. John introduced a monthly column specifically dedicated to chemistry education research and added many other monthly features to the Journal’s repertoire. He re-organized how the journal was produced, reducing time to publication and providing for digitization of all articles — back to the Journal’s origin in 1924. In his last year as editor, John built connections with the American Chemical Society (ACS) that led to the Journal’s current status as a publication of the ACS.

John’s passion for group collaboration, active learning and leveraging numerous voices in decision-making is also evidenced in the construction project for the new Chemistry building, where he was able to put to good use his many years of teaching experience.

John and the Chemistry Facilities Committee worked with the building’s design team to create a building with a cutting-edge focus on learning. The emphasis is on group learning and interactive lectures, not on traditional teaching models with no student collaboration. Each laboratory has an associated write-up room where students can interact with teaching assistants and other students to discuss and interpret lab results. What would have traditionally been a lecture room with unmovable furniture became a Learning Studio — a space designed for 160 students to work in groups of eight on problems that develop their chemistry knowledge. The lecture rooms have movable chairs and extra space per student so that they can work in small groups. Numerous other spaces allow for students to interact with each other, with teaching assistants and with faculty.

John’s career has been devoted to creating, evaluating and disseminating better tools and processes by which students can learn chemistry and he hopes that after his departure, the Department will maintain and enhance its position as a leader among chemistry programs nationwide.

“The Department has a tradition of excellence in chemistry education,” John said. “I expect and hope that this tradition will continue to strengthen every year with both the Chemistry Education research faculty and all of the new staff who have joined us in the last decade.”

Learn more about John’s career, research and accomplishments at BadgerChemistNews.chem.wisc.edu.