The Wickens lab primarily focuses on developing novel strategies for combating long-standing synthesis challenges in organic chemistry. This past year, they took the challenge of developing a new method to synthesize aziridines by leveraging electrochemistry.

Aziridines are three-membered nitrogen-containing cyclic molecules. The ring strain associated with them makes them highly reactive substrates in ring-opening reactions and, therefore, an attractive precursor for the synthesis of several nitrogen-containing compounds. However, the same ring strain makes these molecules highly unstable and, thus, challenging to synthesize. In the past, scientists have used highly reactive reagents to make the synthesis of these strained molecules possible.

“Previously, aziridines were synthesized by preparing reactive nitrogen-containing reagents that were well-suited to react with carbon-carbon double bonds,” said Zachary Wickens, assistant professor in the Department of Chemistry. “However, this approach limits the array of groups that can be attached to the nitrogen atom, and therefore limits the aziridines that we can access. This is because there are only a small number of nitrogen groups that can be successfully turned into the highly reactive species required for this approach.”

The Wickens lab approached the challenge of aziridine synthesis from a different perspective. Instead of trying to find ways to make nitrogen groups reactive, they used electrochemistry to activate the carbon-carbon double bonds, which can then react with a variety of amines to synthesize a larger variety of aziridines than ever possible before. 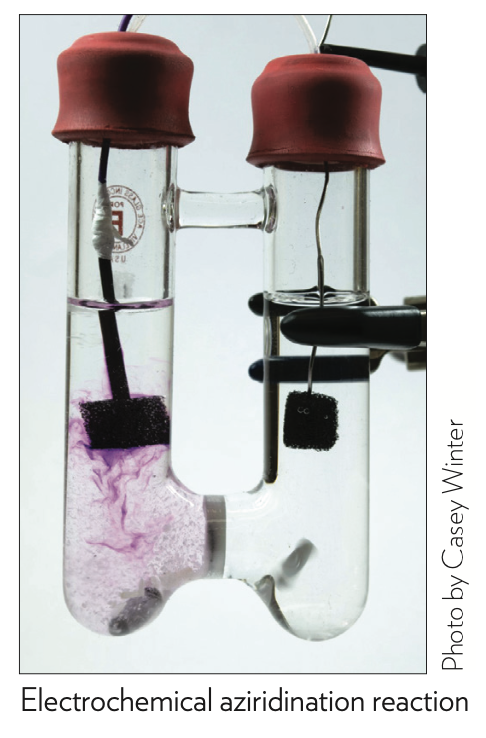 “Using this approach, we have been able to synthesize aziridine derivatives in one step that previously would have been a huge challenge to prepare,” said Wickens. “This development has a lot of potential applications in medicinal chemistry and pharmaceutical development because nitrogen-containing compounds are commonly found in biologically active molecules.”

The Wickens lab’s work goes beyond developing a new route for aziridine synthesis. What they really developed is a different way to transform molecules that hadn’t been considered before. Their development of this novel reaction will help build a new platform for medicinal chemistry and lay the foundation for many different reactions that will stem from the principles on which their research is based.