Lawrence F. Dahl, Professor Emeritus of Chemistry at UW–Madison, passed away unexpectedly on March 20, 2021, at the age of 91. He was preceded in death by his son, Chris Dahl and is survived by his wife of 63 years, Prof. Emerita June Lomnes Dahl and two sons, Lawrence Dahl and Eric Dahl, all of Madison, and grandson Lawrence Samuel Hendon-Dahl. 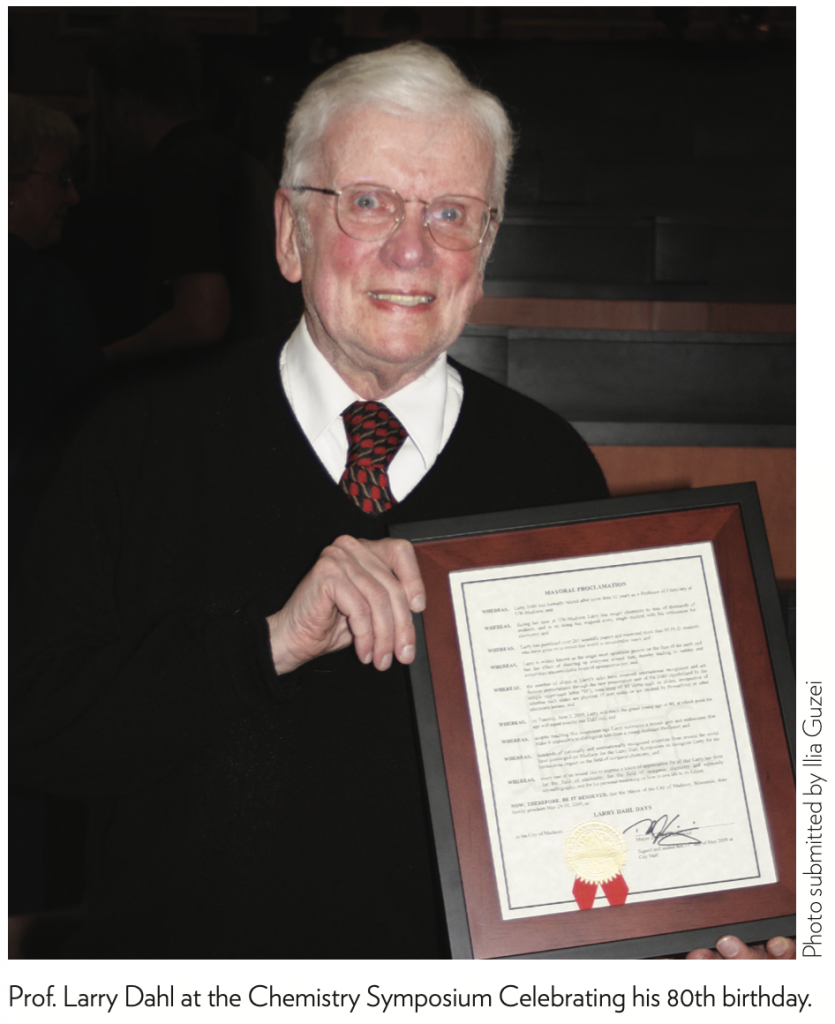 Dahl was born June 2, 1929, in Louisville, Kentucky, and received a B.S. in 1951 from the University of Louisville and a Ph.D. in 1957 from Iowa State University, where his adviser was the late Robert E. Rundle.

He began his independent career as an Instructor in the UW–Madison Department of Chemistry in September 1957, and spent 49 years as a faculty member, beginning as an assistant professor in 1959. After promotion to associate professor in 1963 and professor in 1964, he became the R. E. Rundle Professor of Chemistry in 1978 and in 1991 he was named a Hilldale Professor of Chemistry. Dahl’s research focused on inorganic chemistry, with an emphasis on the synthesis of well-defined transition-metal cluster compounds, analysis of metal-metal bonded molecules and the application of X-ray crystallography to characterization of these and related compounds.

He mentored more than 95 Ph.D. students during his career, and worked with many postdoctoral associates, M.S. and B.S. students and visiting faculty. His classroom instruction included many years of teaching General Chemistry to freshman undergraduates and a graduate-level Chemical Crystallography course. In connection with his research, he served on the editorial boards of numerous journals in his field, including Chemical Reviews, Journal of Physical Chemistry, Journal of Organometallic Chemistry, Journal of Coordination Chemistry and the Journal of Cluster Science.

Dahl’s research had a profound impact on the field of inorganic chemistry, and his contributions have been recognized by extensive awards, most notably his election to the National Academy of Sciences in 1988. Other noteworthy accolades include his election as a fellow of the American Academy of Arts and Sciences (1992) and the New York Academy of Sciences (1975) and his receipt of the American Chemical Society Award in Inorganic Chemistry (1974), the Willard Gibbs Medal (1999), the Pioneer Award of the American Institute of Chemists (2000), and F. Albert Cotton Award in Synthetic Inorganic Chemistry (2010). In 1994, he received the UW Hilldale Award from the Division of Physical Sciences.

Dahl delivered many prominent lectureships, including the Paolo Chini Lectureship endowed by the Italian Society of Chemistry, the J. C. Bailar, Jr. Lectures at the University of Illinois-Urbana Champaign, the Fred Baso- lo Lectures at Northwestern University, and the Sir Ronald Nyholm Lectureship sponsored by the Royal Society of Chemistry. He was appointed a “Kentucky Colonel” by the governor in 1982. A decade later, he received the first Alumnus Award from the College of Arts and Sciences at the University of Louisville and an Honorary Doctorate Degree from the University of Louisville. In 2015, he was named an American Crystallographic Association fellow.

An archetypal academic scientist, he positively affected lives and influenced careers of an innumerable students and colleagues, offering support and words of encouragement in addition to scientific advice. He was sincerely interested in people and extremely generous with his time. An accomplished writer with a long list of scientific publications, Dahl credited the Goddess Fortuna in one of his papers for good luck in chemical synthesis and crystallization she brought his group over the years. He knew how to enjoy life, had an unfailingly positive attitude, and remained enthusiastic about science to the very end. Dahl was a brilliant researcher, thoughtful adviser, a wonderful colleague, and a dear friend.