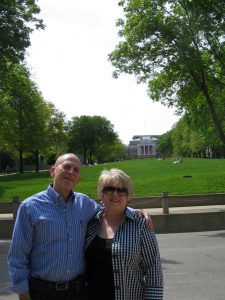 Steven retired in December, 2017 after a 43-year career involving experiments with materials in extreme states of matter as part of the U.S. nuclear weapon national security program. His expertise was in plasma physics and hydrodynamics diagnostics, inertial fusion, pulsed power, and large-scale nuclear weapons physics experiments. He  managed multiple projects and assignments as a Department of Energy contractor at Sandia National Laboratories and the Management and Operating contractors for the Nevada National Security Site. As a Senior Principal Scientist and Division Manager in a Defense Experimentation & Stockpile Stewardship Directorate, he managed a ~$100M science, technology, and engineering program in nuclear weapon science that ensured that the U.S. nuclear weapon stockpile remained safe, secure, and reliable without needing to return to full-scale nuclear explosive testing.

Steven’s spouse of 40 years, Darlene, is a UW-Madison graduate (BA-1971). The couple met on campus during the turbulent early 1970’s while he was a graduate student and she was an undergraduate. They have two grown children and two grandchildren.

During his working years he received the following recognition: